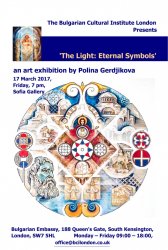 Browse artworks from this artist here
email: polinagerd@abv.bg
phone(s): 0889 855 018,
address: София
Polina Gerdjikova is an architect, designer and artist. She has had 21 individual paintings exhibitions in Bulgaria and abroad. Her last exhibitions “THE LIGHT – A METAPHOR OF THE SPIRIT’’, dedicated to the International Year of Light of UNESCO, were shown at the COUNCIL OF EUROPE in Strasbourg (03.03.2016) and at the State Cultural Institute of MFA of Bulgaria under the patronage of UNESCO. Their common concept reflects the view of the artist, that the Light is an eternal image of THE ONE SINGLE CONSCIOUSNESS, what created everything - according to the modern physics, the Christianity, the ancient religions. That's why symbolic interpretations of the Light present in all history - from the archaeological artifacts, through the Sacred geometry to the theories of science and philosophy.

Polina created the LOGO of the Bulgarian Chairmanship of the Council of Europe (2015-2016). Her paintings are in private and diplomatic collections in Japan, USA, France, Russia, Israel, Argentina, Tunis, Australia, Italy, Spain, Germany, India, China, Netherlands, South Africa and Bulgaria.

The paintings in this exhibition are devoted to the LIGHT and to the continuity of the Light symbols through the centuries - from the Neolithic culture of the Great Mother, the Black Sea civilization 6000 BC, the Thracian and the Christian civilizations, up untill now.

Polina says: "I am convinced that the mission of the art is RE-LIGIO -- Religion according the modern interpretation means recreating the bond between Man and Divine, recall the feeling of oneness with the other people, of oneness with the Universe-Light. “