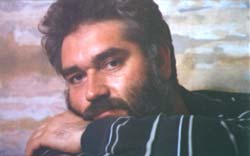 Born
February 28, 1963. Graduated from the "S.S. Cyril and Methodius" University in Veliko Turnovo, Bulgaria, Department of painting, in 1989.
Member of the Union of the Bulgarian Artists, affiliated to the IAA/UNESCO.

Lives and works in Pleven, Bulgaria. Married. One daughter.

Works in the sphere of painting, graphics and graphic design.

During the past years his work is directed to the fantastic myth-folklore world of the Bulgarians. The eternal male and female beginning and the
fight between evil and human spirit are treated in the myth-folklore cycle. Woodnymphs and mummers are some of the most frequently used characters of
the Bulgarian folklore. Cultural variety - from heathen-mytological through ritual-folklore to biblical-Christian symbolism - is revealed in the
compositions.

The artist's colouring is inspired of multi-coloured nature and Orpheus land. The pictorial construction is in richly shaded and harmonious
tones suggesting warmth and expressiveness. The deformation is intentional and leads to a naive manner subordinate to the
irrational.