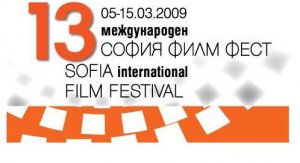 For a 13th year Sofia International Film Festival will gather together in Sofia films, guests, stars, journalists and lovers of good filmmaking. Featured in Variety’s Top 50 unmissable film festivals, the largest in scale cinematographic event that represents Bulgaria proudly to the world will declare itself as one of the important festivals in South Eastern Europe and will take place March 5 - 15. What started as a thematic music film festival, went successfully through 12 previous editions to become the cinema marathon of the year in Bulgaria with its own serious claims for the most demanding audience, because it brings the current world cinema trends to the domestic viewers and the latest in Bulgarian and regional cinema to the world.

The festival is organized by Art Fest under the auspices of the Municipality of Sofia and in partnership with the Bulgarian Culture Ministry, the National Film Centre, the National Palace of Culture and the Bulgarian National Television with the support of the programmes MEDIA and MEDIA International of the European Commission, national and foreign cultural institutes and sponsors. The general sponsor of the festival is Jameson Irish Whiskey.

The 13th edition of Sofia International Film Festival will take place March 5-15 2009 in Sofia with an additional programme running March 16-22 in Sofia, Plovdiv and Burgas.

The festival bill includes 90 feature, 38 documentary and 60 short films. They will be screened in one of the following categories that have become traditional for this festival:

European Screen with a focus on British cinema

The world premiere of the latest feature film by Bulgarian director Georgi Djulgerov will open the 13th edition of Sofia International Film Festival.

An international jury will confer the main prizes of the 13th International Sofia Film Festival.  The president of the jury is Hungarian director Janos Szasz.

The Festival will confer also the traditional awards – the Jury’s Special Prize, the FIPRESCI AWARD, the Audience Award of Sofia Municipality, the NO MAN’S LAND Award for best Balkan feature provided by Damyanitza winery, and the KODAK Award for Best Bulgarian Feature Film.

The JAMESON AWARD for best Bulgarian short film will have its seventh edition. The prize includes a statuette and EUR 6 000.

French scriptwriter, director, cinematographer, photographer, film editor, composer and writer Siegfried will be coming again to Sofia International Film Festival. He will present five of his films to the Bulgarian audience – beginning with his feature film debut “Louise: Take 2” (1998), and the adventurous “Sansa” (2003), the animated film “Ada”, and the film experiments Kinogamma Part One: East (2008) and Kinogamma Part Two: Far East (2008). Siegfried is a French director and musician born in 1973. He is the composer of the original score of several European and Russian films, including the International Competition entry “Baksy”. The gifted French filmmaker will give a concert and will present his own exhibition of auteur photographs in partnership with the French Cultural Institute in Sofia and Sofia International Film Festival.

Traditionally Balkan cinema occupies a prominent place in the programme of Sofia International Film Festival, where the leading titles from the region are presented. Aida Begic’s “Snow” (winner of the Critics Week Grand Prize at the 2008 Cannes Film Festival) is for the admirers of quality Balkan cinema. The film offers an alternative view at post-war Bosnia – only 2 years after the end of the war conflict that divided Yugoslavia 6 women, 1 elderly man, 4 girls and a young boy are trying to survive in Slavno, Eastern Bosnia. They all gather the remains of their lives in an attempt to begin a new and more meaningful life. But things are likely to change, when two businessmen come with an offer to purchase the village in order to build a resort and hotels. The producer of the film Elma Tatarjic will present the film “Snow” in person to the Bulgarian audience. Among the highlights of the Balkan films at Sofia International Film Festival are the latest film of Slovenian Damjan Kozole “Forever”, the Croatian film “No One’s Son” by Arsen Ostojic, Goran Markovic’s “The Tour”, Uros Stojanovic’s “Tears for Sale”. The star of the Turkish film “My Marlon and Brando” Ayca Damgaci (winner of the Heart of Sarajevo for best actress) and its director Huseyin Karabey will come for the Sofia screening of their film. Ayca’s heroine is a Turkish actress residing in Istanbul. While shooting a film she meets on location the Kurdish actor Hama Ali and falls in love with him, but when the filming is over, Hama has to go back to Northern Iraq. Despite the distance the two try to save their love, but the military situation in Iraq places obstacles on their way. Led by her love Ayca decides to leave for Iraq without considering seriously the danger of the war.

This year Sofia International Film Festival will present a selection of several outstanding films united by the motto “Turkey in Focus”. These include “Three Monkeys” of director Nuri Bilge Ceylan. The three monkeys from the title are no other than a husband and a wife and their son, to whom life offers sudden twists of fortune. Like the famous three monkeys of wisdom, the members of this family ‘hear no evil, see no evil, speak no evil” going deeper into spiritual poverty and estrangement. Other titles include Yesim Ustaoglu’s “Pandora’s Box”, a film about discovering a new meaning in life, and “Point” by Dervis Zaim and “Milk” by Semih Kaplanoglu.

The Russian and Turkish programmes are part of the joint initiative of the festivals in Sofia and Sarajevo entitled “Sofia CineLinks Sarajevo” and supported by the new programme MEDIA International. The programme of the European Commission aims at partnership between events and professionals from EU member states and MEDIA and non-EU member states. In Sofia the programme supports the promotion of films and guests from non-EU countries. Alongside the Russian and Turkish films, the bill includes also works from Argentina, Mexico, India and Iran. “Sofia CineLinks Sarajevo” will have its place at Sofia Meetings, where a few film projects of countries close to Bulgaria and still not members of the European Union will be presented.

13th Sofia International Film Festival will present more than 20 films in its Documentary program. The selection of Documentary Films for the has been entrusted to two gifted Bulgarian documentary filmmakers, Andrey Paounov (“Georgi and the Butterflies”, “The Mosquito Problem and Other Stories”) and Boris Despodov (“Corridor No. 8”). For the first time the festival will run a documentary competition with 10 entries selected by Paounov and Despodov. The jury that will confer the prize for a documentary film will be led by famous director and producer Adela Peeva. The documentary competition is held with the support of the Bulgarian National television.

Some of the Bulgarian documentary entries are “41° According to Azaryan” by Lilia Abadjieva, “Cuba Is Music” by Iliyan Dzhevelekov, “Bridge over the Wall”, a music and documentary look at the music of Nikolay Ivanov and the OM band, made by Konstantin Zankov, “Sevt the Immortal” by Zlatina Russeva, “Djazzta-Prasta” by Andrey Slabakov, Atanas Kiryakov’s film “Ivan Kirkov or to Survive in a Memory”, Malina Petrova’s trilogy “Void by Prescription”.The documentary Bulgaria-Austria co-production by director Kostadin Bonev, “Europolis”, will be the Bulgarian documentary gala at the 13th edition of Sofia International Film Festival.